Abstract: Systems and methods that incorporate various techniques for teaching gestures to a user of a multi-touch sensitive device are disclosed herein. Such techniques can include presenting visible feedback of gestures, such as animated motion trails and/or hand motions, along with affirmative feedback for correctly performed gestures and negative feedback for incorrectly performed gestures. Such techniques can be expanded to provide training exercises that present tasks requiring a particular gesture or sequence of gestures to be performed. These training exercises can take the form of games or other engaging activities to encourage use. 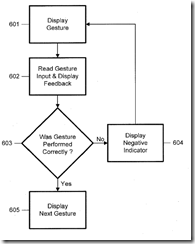 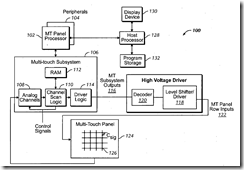 Abstract: Techniques for identifying and discriminating between different types of contacts to a multi-touch touch-screen device are described. Illustrative contact types include fingertips, thumbs, palms and cheeks. By way of example, thumb contacts may be distinguished from fingertip contacts using a patch eccentricity parameter. In addition, by non-linearly deemphasizing pixels in a touch-surface image, a reliable means of distinguishing between large objects (e.g., palms) from smaller objects (e.g., fingertips, thumbs and a stylus) is described. 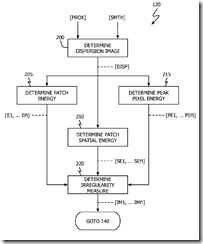 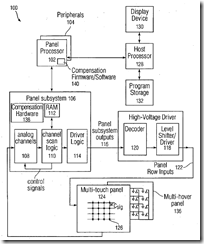 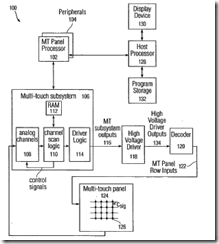 Abstract: A multi-touch sensor panel can be created using a substrate with column and row traces formed on either side. Metal traces running along the border of the substrate can be used to bring the row traces to the same edge as the column traces. A single flex circuit can be fabricated to connect to the rows and columns on directly opposing sides. Flex printed circuits can be bonded to directly opposing attachment areas of a substrate by cooling one side of the substrate while bonding the other. In addition, “coverlay” material extending over right-angled traces on the flex circuit ensure that those traces do not get shorted should conductive bonding material get squeezed out during bonding. Furthermore, a spacer is placed at the distal end of the flex circuit to apply even bonding pressure over the entire flex circuit attachment area during bonding. 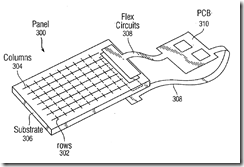 Abstract: A multi-layer cover for an electronic device having one or more of a sensor panel, a proximity sensor, an ambient light sensor, and a display device can include an outer hardcoat, a structural layer, an IR transmissive ink layer, a mask layer, and a backside hardcoat. The backside hardcoat can reduce cover warpage, enable full surface lamination of the cover to the sensor panel, prevent bubbles from forming in transparent windows in the cover, enable a wider range of functional inks to be applied in various layering orders to allow certain types of light to pass through while blocking others, and hide the sensors to provide a seamless, uncluttered visual appearance. 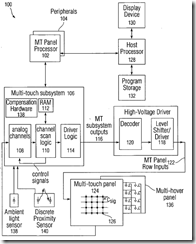 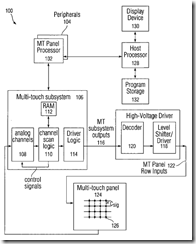 Abstract: Techniques for identifying an object in close proximity to, but not in contact with, a multi-touch touch-screen device are described. By way of example, a cheek or ear hovering a short distance from the touch-surface (e.g., approximately 1 to 3 centimeters) may be identified and distinguished from physical contacts to the surface. 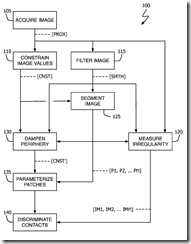 Abstract: Multi-touch touch-sensing devices and methods are described herein. The touch sensing devices can include multiple sense points, each located at a crossing of a drive line and a sense line. In some embodiments, multiple drive lines may be simultaneously or nearly simultaneously stimulated with drive signals having unique characteristics, such as phase or frequency. A sense signal can occur on each sense line that can be related to the drive signals by an amount of touch present at sense points corresponding to the stimulated drive lines and the sense line. By using processing techniques based on the unique drive signals, an amount of touch corresponding to each sense point can be extracted from the sense signal. The touch sensing methods and devices can be incorporated into interfaces for a variety of electronic devices such as a desktop, tablet, notebook, and handheld computers, personal digital assistants, media players, and mobile telephones.

Abstract: Techniques for identifying and discriminating between different input patterns to a multi-touch touch-screen device are described. By way of example, large objects hovering a short distance from the touch-surface (e.g., a cheek, thigh or chest) may be identified and distinguished from physical contacts to the surface. In addition, rough contacts due to, for example, ears and earlobes, may be similarly identified and distinguished from contacts due to fingers, thumbs, palms and finger clasps. In one implementation, a unique technique to reduce the noise in segmented image peripheral pixels. Abstract: Techniques for identifying irregular objects in contact with, or in close proximity to, a touch-surface are described. An irregularity measure is determined based on the regions intrinsic characteristics (e.g., energy content) rather than on the shape (or pattern) of the pixels within the region. Abstract: Techniques for identifying and discriminating between different input patterns to a multi-touch touch-screen device are described. By way of example, large objects hovering a short distance from the touch-surface (e.g., a cheek, thigh or chest) may be identified and distinguished from physical contacts to the surface. In addition, rough contacts due to, for example, ears and earlobes, may be similarly identified and distinguished from contacts due to fingers, thumbs, palms and finger clasps. 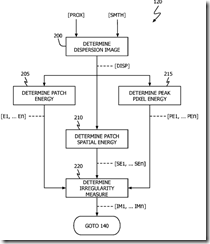