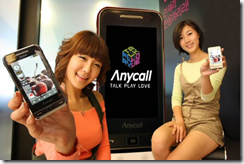 Samsung on Friday stepped up its efforts to lead touchscreen phones with the launch of the AnyCall Haptic 2, the second generation of its device in one year to rely on its namesake vibration feedback technology to simulate physical button presses on its screen. The quick follow-up to the March original is distinguished by its customization: users can personalize the vibrate mode and have access to more than three times the number of widgets on the home screen for quick access to weather and other info.

It also brings a much sharper five-megapixel camera with flash and image stabilization as well as built-in storage of either 4GB or 16GB depending on the model.
Other features of the touch phone are similar to the first-run device but are still considered high end today, including the 3.2-inch screen, mobile banking as well as an internal DMB tuner to pick up over-the-air digital TV in Korea. The phone is available in a 4GB version as either the W550 (for the carrier SKT) or W5500 (KTF) for the equivalent of $605 and is exclusive to SKT in 16GB form as the W555, which sells for $691.
North America is unlikely to get the Haptic 2 in its existing form, though the handset is in some respects similar to the i900 Omnia; the latter is already suspected of reaching the US in a sub-variant destined for AT&T. [via Akihabara]