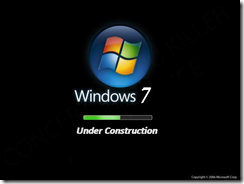 NEEW DELHI: It’s time to put speculations at rest, software giant Microsoft has confirmed that its next operating system Windows 7, successor to Windows Vista, will be unveiled next month (28 October) at its Professional Developers Conference (PDC).
Earlier this week, Microsoft technology evangelist Mike Swanson had posted that PDC 2008 attendees will receive USB 2.0 based 160GB external HD with Windows 7 pre-beta build.
The company is also known to have added more than a dozen Windows 7-specific sessions to the PDC agenda. These include: New APIs to Find, Visualise and Organise; Integrate with the Windows 7 Desktop Taskbar and Best Practices for Developing for Windows Standard User.
In May, Microsoft publicly demoed Windows 7 at a news conference. The high point of the new OS is its "multi-touch" interface.
Other than, the touchy feely look, the demo also showed a user manipulating photos, browsing a map and playing an onscreen piano with simple one and two-finger taps and gestures.
However, the company did not confirm when it plans to ship Beta 1 of Windows 7. Microsoft plans to unveil the final version of Windows 7 around January 2010.