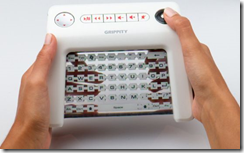 Many HCI researchers have been interested in back-typing or rear-side touch. For example, Microsoft introduced LucidTouch that combines a webcam and a multi-touch panel installed on the rear side of a mobile device. Apple filed a patent application claiming a device with force-sensitive back-side interface.

Although the interface concept is cute, I had expected that a real product would be in the market at least after 3-4 years until I met Grippity keyboard from an Israeli startup company.

The keyboard is composed of a keypad whose mechanical structures are configured on the back of the device and a trackball on its top right corner.

However, I think the company might ignore an important motivation of back-sided or rear-sided touch user interfaces - avoiding the occlusion problem [1]:

Two fundamental problems with direct-touch finger input are that the user’s finger occludes the target in the critical moment before touching the display (the occlusion problem) and that the touch area of the finger is many times larger than a pixel of the display (the fat finger problem).

In my opinion, the problem with Grippity is that the occlusion problem is not appeared since it doesn't have any display to be occluded. 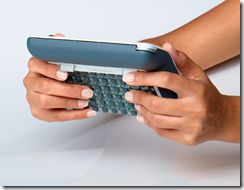 Grippity now goes further to have more applications. Grippitiy BackTyping has been applied to gaming consoles and mobile devices. Unfortunately, detailed information about Grippity 3.0 and patents are available for certified users. 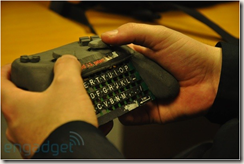 This is a demo clip of Grippity. 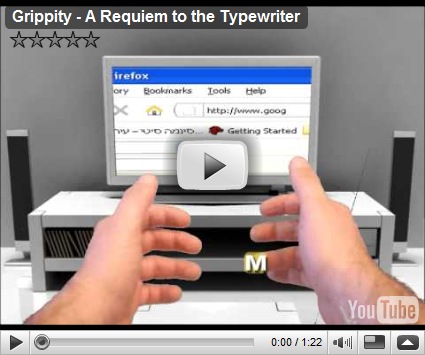 The articles found at Grippity websites. They are commercial articles but show good justification of using back-of-device

they didn't ignore - they solved this very elegantly! the keys hide most of the fingers but just enough for you to know where they are, instead of the fingers hiding the key which you are about to press. i checked their web site and they claim to have a transparent display version in the future. can't wait!!