Get Ready For a Game of Soccer with Walky Robot! 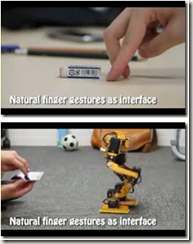 The ubiquitous recession does not seem to hurt the craze about robots in Japan. Some young students of the Graduate School of Media Design in Keio University have come up with another innovative robot. Walky Robot can be controlled with just a tweak to the iPhone interface. You used your fingers to access music and video on the iPhone till now. Now you can use them to control the movements of Walky. Anyone who has used the iPhone will confirm that it is the easiest thing to do. Gone are the fancy consoles, keyboards, joysticks and remote controls. Mere finger gestures are enough to set the robot into action.


Walky is a bipedal walking robot which can mimic human walking movements with gusto. We can use different finger expressions to supplement the actions of our legs. The fingers can be used to simulate all movements of the legs like walking, jumping, running, turning or even kicking. These finger gestures are captured as a controlling method for Walky. The controlling interface is indeed intuitive as it does not entail having to go through the rigorous study of complex instructions. Along with the movements of the fingers, the speeds with which they are executed are also transferred to Walky.

With robots entering the mainstream, it is becoming more important to develop controls which are easier to understand and execute. There is no use using hardware and software input systems which have no relationship with the motions to be executed. They are not only hard to understand but also cumbersome to use. The iPhone presents a natural input system to control the robot. People can easily grasp the instructions to control the robot. This interface is of great use as far as entertainment and education for kids are concerned. But how far it will suffice in the long run and prove its supremacy over voice controls remains to be seen. 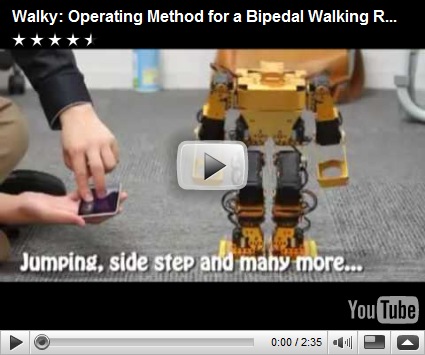