When I read Internet articles on this patent, I thought that it's a kind of device sensing 3D spatial position of a user's finger. However, the patent reveals a different configuration. It's not a 3D spatial input device like its another patent US2008005703. The patent describes a combination of force and touch sensing.


As shown in figure below, the presented device adopts two different sensors. One is a conventional touch sensor (screen) and the other is a force sensing module. By mixing signals from those two, the host (device) can sense two dimensional finger movement with pressure. Since it can detect z directional force toward the display surface, the term "3D touch" is not a wrong understanding of this patent. However, the term 3D should be used carefully because people usually think spatial movement when they first hear the term "3D'. 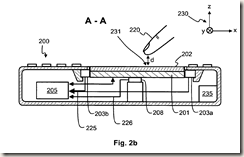 The conceptually right title of the patent, I think, might be trial-axis touch sensing.