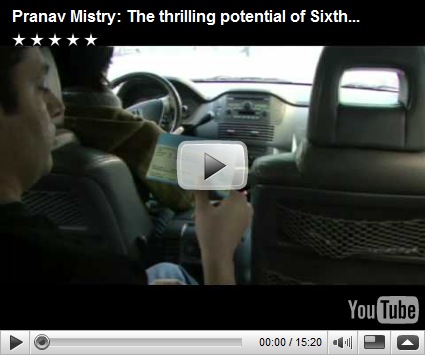 He continuously talked about bridging gap between real life and digital worlds. More specifically, it seems that he is interested in controlling and getting information using everyday objects.

Here are some excerpts form his talk.

What ever he named it, I call it a low-cost data glove. It’s made of two deconstructed mice.

Two mice are collectively transformed into a single data glove

The second project is about digital note taking called Quickies. He showed demonstrations how a user can share, store, and print analogue sticky notes. Fore more information, the project page or following paper will help:

SixthSense is a 3D gestural interface using a small project, webcam, and microphone.

It turns everyday surfaces into multi-touch gestural input pads – the core function of SixthSense. It is achieved by combining image processing and gesture recognition with images gathered by the webcam. You can see four color markers on his fingers. Those explicit markers can help processing algorithms easily figures out a user’s gestures.

Applause I at the talk – taking a picture

SixthtSense can track touch with a microphone and camera. The microphone detects the sound of touch, and then the camera tracks the touch point. So, a normal sheet of paper acts as a computer with SixthSense.

This demo shows exchanging information between two objects. Note that the concept of pick & drop was first presented by Sony.