Is Touch Prepared for Your Desk?

Touch on your desk

There are interesting articles discussing usefulness of touch in desktop computing environment [1-3]. The discussions are based on the usability of All-in-One PCs such as HP TouchSmart. All those articles say that it is not so convenient to use touch-enabled All-in-One PCs. 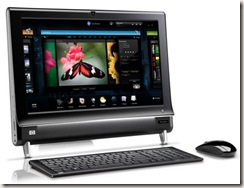 The most critical point using such a touch screen PC is that a user should keep his/her hands up so long time. And it is said to be the reason why the usability of desktop touch screens is inferior to that of mice/keyboards. The problem has been known as Gorilla arm [4-7].

This Gorilla arm is not a problem for traditional touch screens embedded in kiosks and ATMs in public spaces because people usually use them for a short period of time. In addition, user tasks are just pushing a few graphical buttons on the screen and waiting for a minute – extremely simple. 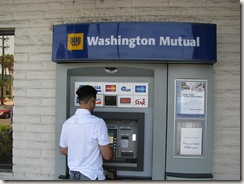 Fig. 2 A kiosk (Image by wamu atm via Flickr)

It is neither a problem with recent tabletop interfaces from MS, Perceptive Pixel, etc. Since users can naturally place their hands on the table [2].

You don’t get this problem with Microsoft’s Surface computer, which is a low table in front of you. And the TouchSmart layout tends to work well in the kitchen, where you are standing with the computer at a lower place.

In addition, usage periods of applications are also short. Most demo scenarios such as photo browsing, map navigation and gaming do not require long-term concentration.

Fig. 3 Tabletop interfaces (a) MS Surface (Image by Daniel Williams via Wikimedia) (b) The reacTable (Image by matthias.kranz via Flickr)

However, for vertical touch screen setup, the environment becomes different. Most popular demo scenarios of the vertical touch-enabled PC are same with those of tabletop interfaces. But for the vertical setup, you need to hold both of your arms in front of the touch screen to make multi touch gestures. This vertical setup is enough to be used in the kitchen or public places. But it does not work well on the desk. 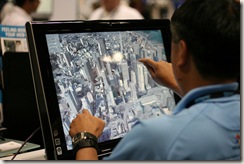 As a solution, Wylick [1] and Arrington [2] have suggested an idea of using the slanted layout instead of the vertical setup. The suggested layout follows the forms of architect desks shown in Fig. 5. The result will look like Fig. 6. Not a bad idea, but it has something to think about. First, the concept assumes that a user won’t need any physical peripheral input devices [2] except for the touch screen. Touch UI is a really efficient way of directly manipulating digital objects. However, most office/home works with PCs rely on massive text input. For that type of works, touch is not feasible. The angled layout, as is originated from architect desks, is perfect for architects or designers but not for office/home workers. Even web browsing requires a large amount of text input. 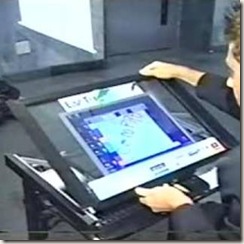 The aforementioned problem, I think, is mainly due to the physical layout itself. The vertical touch screens tell you that they are designed for displaying information with minimal direct interaction with you. Like a reading easel, the only interaction might be limited to very simple tasks such as selection, page turning, etc. If you have a touch screen slanted, you implicitly decide to use it as a drawing tool. With a horizontally mounded touch screen near you, the interaction between you and the touch screen would be maximized.

Not so surprisingly, designers have already found a dead simple solution – the combination of angled touch monitors and traditional PCs (Fig. 7). Engineers usually call it hybrid approach :] The problem of the hybrid approach is that the required budget is high and current operating systems are not designed to support such configuration. However, the first problem will be resolved as time goes by. The latter needs longer time but companies and researchers are working on this topic. 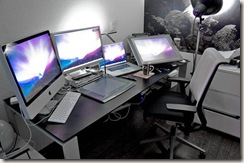 Fig. 7 A set of tablets and PCs on a desk (Image by rus-star-dot-com via Flickr)

For example, Microsoft has revealed an illustration of a future working place (Fig. 8). There are several thin multi-touch surfaces on the desk. The monitor is very large enough to view information efficiently. Besides this conceptual illustration, they have done some research works regarding digital desk. Besides Microsoft, Sun has proposed StarFire concept working environment and Muller-Tomfelde et al. [8] have discussed a work environment composed of a tilted tabletop and a vertical display (Fig. 9)


For more information about Microsoft’s digital desk research, read the previous articles below: 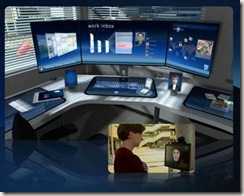 Fig. 8 A layout of future desktop from Craig Mundie’s presentation [9]

Fig. 9 Setup of the work environment composed of a tilted tabletop and a vertical display [8]

Touch technologies show great potential for many consumer electronics. However, as the success of iPhone implies, touch should be carefully applied to target systems. Simply adding cutting-edge touch technologies to conventional devices does not guarantee that consumers accept the touch-enabled products.

In order for touch screens to make a leap from handheld computing to desktop computing, touch-related companies should focus on asking themselves the very fundamental question - where and how to use it. The desktop computing environment is quite different from that of handheld devices and specialized single function devices such as kiosks and ATMs. Users want to do almost everything with it – writing, surfing the web, communication, drawing, etc. One single touch-enabled device cannot meet all of the needs. A hybrid setup with horizontal, tilted, and vertical touch screens might be regarded as a solution. In addition, each setup should have its own unique touch function. For example, the vertical touch screen is designed to interact with a user at a distance, while the tabletop and tilted (angled) setups are specialized for finger-touch and pen inputs.