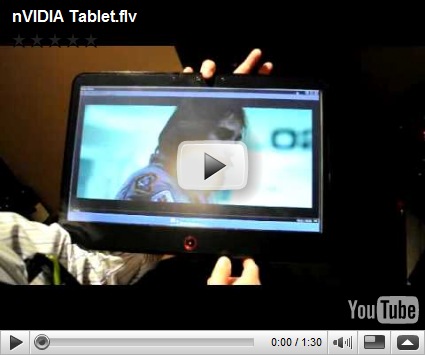 With all the hype surrounding the Apple Tablet and the expectation of getting a Christmas release, it was quite natural for everyone to be confused by the appearance of another NVIDIA Tegra Tablet. It was first spotted in the hands of the NVIDIA CEO Jen-Hsun Huang and mistaken to be of Apple heritage. But it was later discovered that this exclusive piece of hardware is in fact backed by ICD. In fact, no details were forthcoming of this creation until it reached London. With all gadget freaks hot on the trail, it was discovered that this tablet is indeed powered by Tegra and is still in the prototype stage.


Being in the initial stages of development, it still does not have all the features which would delight its followers. It has quite a large display of about 15 inches with a resistive touchscreen. Being less than 1 inch in depth, it is quite handy. It promises to provide video playback at 720p. In order to allow the tablet to stay upright, there is a wireless recharge station based accessory with optimal modifications. The Tegra internals are reminders of the Zune HD and the smartbook devices. This tablet has been brought to the public eye to entice collaboration with T-mobile. With only a finger-friendly OS and Stantum multitouch firmware to complete the set up, nothing can stop this device from driving the Apple tablet to oblivion.

Everyone is still hopeful that by the time this tablet reaches its finishing stages, it will indeed be equipped with the most convenient OS and a multitouch technology. And if the design is sufficiently improved, then it will surely give its competitors food for thought. But with Apple still sharing congenial relations with NVIDIA, it is unlikely that anything will sour the association. However, it still remains to be seen whether T-mobile will take notice of the feelers and jump to the occasion. This may lead to a worthwhile partnership which will be profitable for all concerned.

via Engadget, Ubergizmo, and TechEBlog
at Saturday, December 05, 2009