With video games riding the wave of popularity and manufacturers queuing up to devise more intuitive methods and interactive games, it is becoming increasingly important to create new types of gaming controls to help play them. It is easy to manipulate the movements when the protagonist is moving on the land in a particular game, but when he moves to the air or to the sea, it becomes difficult to translate the motions in all three directions. The Suma is a laudable effort to provide a 3D PC gaming control with squeezable user interface technology. The finger and hand grip movements are encoded in software form which helps to provide a sophisticated control of games and other computerized applications.

The Suma is a drastic improvement over the Wiimote which was heretofore considered the ultimate in game control. Squeezing is the basic requirement of this control. The application can be best pictured when you have to fly around in a spaceship while playing a video game. The three-dimensional control can be obtained by squeezing the Suma in the right direction. In fact, it has been found that gripping, grasping and squeezing are the first few impulses of a child, since quite a large portion of our brain is devoted to the reflexes of our hand. Suma sensors quickly and sensitively interpret every gesture of our hands and provide much better control than the ones found today.

The manufacturers of Suma assert that it can be used in a variety of fields. Every sphere which can take advantage of the coordination between the hand and imagination can make use of this control. Apart from gaming, creative arts and music too can focus on Suma. In fact, the future of computer applications is limited only by the lack of flexibility in input devices. Even the existing applications which are in 2D and web based can make suitable use of Suma. The expense involved in using a Suma is also not much with the cost being less than $1. The founders of Suma, Cambridge Consultants, are expected to make a showing of Suma at CES, Las Vegas in early 2010. There will be no stopping Suma after that. 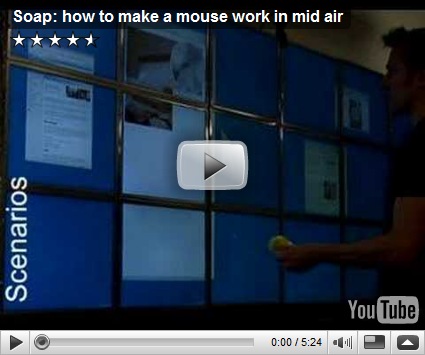