HTC Evolve: Do We Have A Winner On Our Hands? 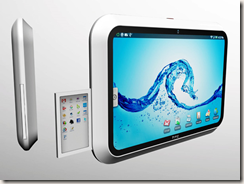 With the tablet being the focus of attention of most of the computer manufacturers, each one is vying for the top place in the market. Now that Apple and Microsoft have announced their plans to launch tablets early next year, it is time for HTC to jump into the band wagon. But to its credit, HTC Evolve is certainly going to be packed with interactive designs which are going to take computer interfaces to the next level. Timur Pinar is the man behind this HTC Evolve and he has certainly tried to make a device which will give all other players in the market a run for their money.

The HTC Evolve has several features for you to rave and rant about. It has a concave side ergonomic body design which is certainly a blessing for your hands. Next in line is the stylus pen which will aid in drawing. You can thus execute renders quite easily and comfortably. This is particularly helpful if you are going to use programs like Adobe Photoshop and Alias Sketchbook. And the final touch of splendor id added by the OLED touch screen display which pops out from the left side of the HTC Evolve. There are pre-programmable buttons which increase the functionality.

You just need to add a SIM card to the HTC Evolve to have access to the Internet at all times. It will function just like a cell phone and allow you to make calls and write SMS messages. Watching movies and TV shows will be a constant feature and playing any video game will be a welcome prospect anytime during the day. The price is still a secret but it is a certainty that it will have several buyers lined up when it is released.