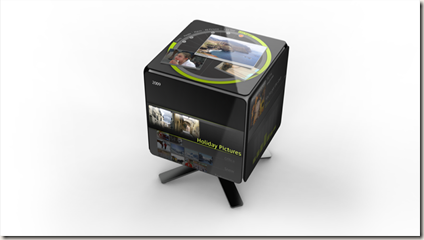 Recently, I’m continuously surprised by many companies and people who bring out cool technologies sleeping in the piles of research papers. Today’s surprise is Gesture Cube, which is the result from the joint work of three companies  - IDENT Technology AG, ZINOSIGN®, LUNAR Europe

“Gesture Cube uses 3D spatial movement tracking to help transform navigating a device into a magical intuitive experience. The underlying GestIC® technology detects your hand´s approach and movements - your favorite apps and media all at a wave of your hand.”

At this time, the web site contains the video of concept scenarios only, not a real working system. 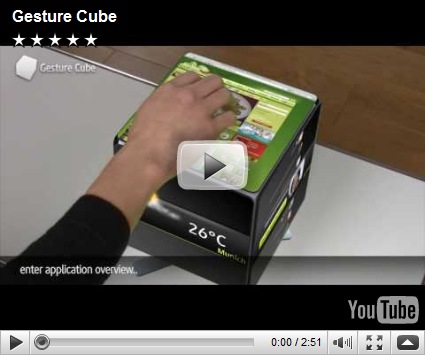 However, IDENT Technology AG provides the working example of GestIC® that is used in Gesture Cube. 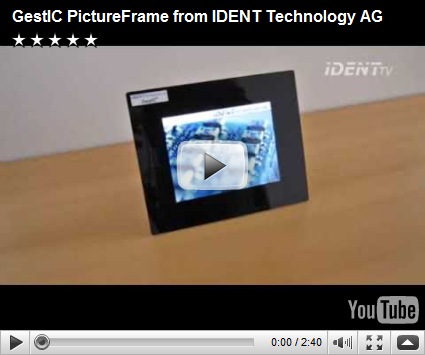 Simply speaking, Gesture Cube is a portable information/entertainment device that you can control with direct and proximal touch gestures. Each surface of Gesture Cube has its own touch sensitive display that can detect both of touch and proximity.

Overall, it shows us an awesome implementation of two interesting research topics in the field of touch user interface.

Unlike traditional touch interfaces, the interaction of Gesture Cube is performed across two or more surfaces of the device. Many researchers have proposed similar works - hand grip recognition, back-of-side interaction, and Cubtile. There are also prototypes that have touch sensors and LED arrays covering the whole surfaces of devices (gCubik, FentixCube, and Z-agon). But the advancement of Gesture Cube comes from the fact that all of its surfaces are covered with advanced touch screens.