Press Release: YDREAMS PARTNERS WITH CANESTA TO REDEFINE AUGMENTED REALITY AND BRING IT TO THE BROAD MARKET

MONTE DA CAPARICA, PORTUGAL and SUNNYVALE, CA – MAY 24, 2010 – YDreams and Canesta Inc. today announced a partnership that has the potential to redefine augmented reality and bring it to the broad market.

“Augmented reality will change the way we market and use products, communicate and entertain ourselves,” said Ivan Franco YDreams´ R&D Director. “But, to date, implementing augmented reality solutions has only been possible with very specialized techniques. By working together with Canesta, we look forward to making augmented reality a part of everyday life.”

YDreams has been working on Natural User Interfaces (NUI) for more than 9 years for some of the largest corporations in the world. To do this, the company has developed a sophisticated proprietary software platform, combining multiple advanced technologies such as computer vision, physics simulation, artificial intelligence and several others.

“One of the most difficult aspects of designing NUI applications has been to create a sense of real world interactions. We envision consumers naturally browsing through digital catalogs, adding to the user experience of ecommerce or being inside movies, delivered by IPTV platforms.”

Until now Augmented Reality has delivered limited applications to the general public, mostly offering 3-D objects on top of visually obtrusive markers. By using Canesta’s 3-D vision sensors, YDreams applications can do real-time capture of any object in 3-D, without the aid of any special markers or enhancements. “This completely changes the scope of where and how augmented reality can be used,” said Franco.

“YDreams is among the world’s leading organizations in developing augmented reality experiences,” said Jim Spare, president and CEO of Canesta. “By combining our mass market 3-D input sensors with YDreams’ expertise, we will see broad uses of these formerly very specialized applications. This will change how immersive and realistic so many kinds of communications and interactions will become.”

A video of a demo developed by YDreams can be viewed online at YDreams’ official YouTube channel (www.youtube.com/watch?v=qXcIZ1R68SQ) and it will be possible to experience the technology live at the ARE2010 event (augmentedrealityevent.com) on June 2-3, in Santa Clara, CA. 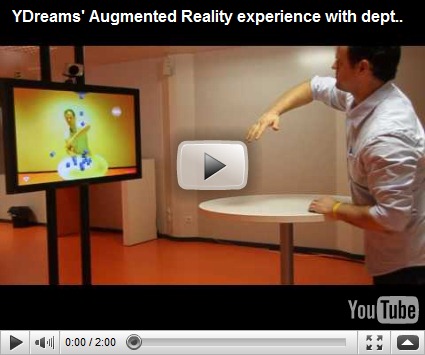 YDreams (www.ydreams.com) is a global company that is redefining the concept of interactivity, with a focus on the exciting field of Augmented Reality technologies. Over the last few years YDreams has been developing full-scale interactive environments (from stores to exhibitions), products and intellectual property, combining technology and design.

YDreams researches and develops proprietary/patented technologies in areas such as image processing, augmented reality and gesture-based interfaces, resulting in best of breed solutions that are integrated into projects and products, or licensed to partners.

YDreams has developed over 500 projects for clients all over the world, such as Adidas, Vodafone, Nokia, TMN, Barclays, Coca-Cola, Santander, BBC, JCDecaux, IDEO, among others, and partnerships with Microsoft, Siemens, Geodan, Grupo Portucel Soporcel, Sonae Indústria, Corticeira Amorim, among others.

YDreams was founded in 2000, with headquarters in Monte da Caparica, Portugal, and offices in Barcelona, Spain; Rio de Janeiro and São Paulo, Brazil.

Canesta (www.canesta.com) is the inventor of revolutionary, low cost electronic perception technology and leading provider of single chip CMOS 3-D sensors that fundamentally change the relationship between devices and their users. This capability makes possible “the other side of 3-D” – true 3-D perception as input to everyday devices, rather than the widely understood 3-D representational technologies as output. Canesta’s 3-D input technology, based upon tiny, CMOS 3-D imaging chips or “sensors”, enables fine-grained, 3-dimensional depth-perception in a wide range of applications. Products based on this capability can then react on sight to the actions or motions of individuals and objects in their field of view, gaining levels of functionality and ease of use that were simply not possible in an era when such devices were blind. Canesta’s focus is on mass market consumer electronics, but many applications exist in other markets as well. Some of Canesta’s customers and partners include Hitachi, Honda, Optex, Optronic, Quanta, SMSC, and others which have yet to be announced.

Canesta is located in Sunnyvale, CA. The company has filed in excess of fifty patents, 41 of which have been granted so far

YDreams is a trademark of YDreams - Informática, S.A., registered in the US and other countries.

Canesta is a trademark of Canesta Inc., registered in the US and other countries.

Other company names above may also be trademarks of their respective owners, of which no trademark symbol omission is intended.